Al Khayyat directed the people concerned with the issue to obviate issues that occurred in the past rainy seasons and work together as a team to overcome any similar problems and issues. He also directed the people in charge to conduct a complete survey in the area, carry out the necessary amendments in the land level in Wadi Al Sail, implement a network in some areas and deepen the storm water drainage network, in addition to constructing a concrete barrier on both sides of the canal.

Al Khayyat also addressed the issue of using some locations for urban and housing projects, when in the past the same locations were used as storm water drainage locations; including the Valley of Buhair, Wadi Al Sail and Wadi Al Hunainiya. As a result, the Ministry of Works is now obliged to search for alternative methods to implement projects related to storm water drainage, especially in non-coastal areas and areas far from the coast like A’Ali, Isa Town and Riffa.

The Undersecretary stressed the importance of surveying all storm water accumulation points in all the Kingdom’s Governorates, following-up precautionary measures along the year, taking immediate actions during the rainy season and reducing possible damages as much as possible, following-up proposed projects aiming to reduce storm water accumulation and preparing a monthly report on work progress.

Wadi Al Sail tour was followed by a visit to Hajiat Avenue, where Al Khayyat and his companions discussed ways to tackle storm water accumulation issues in the area. The Ministry’s team also visited Sanad and Shakhoora, where Al Khayyat and the team looked into the revamp of the road parallel to Abu Saiba School, the Ma’atam and the entrance to Shakhoora Village. The project comprised of revamping the road, providing pedestrian pavements for the school students, implementing speed humps close to vital areas, implementing a storm water drainage network close to the school. The project is expected to complete this month. 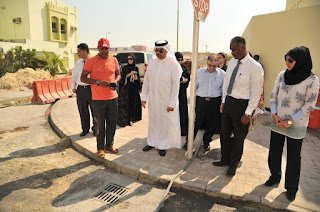 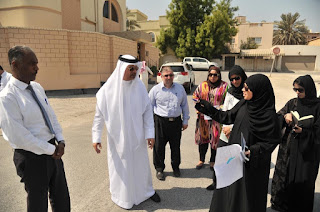